The Ascending Helix with a Decreasing Pitch

There is a frequently unrecognized, though insidious perspective concerning improvements of all sorts. It is the expectation that they will be accomplished in one plan-do-check-adjust cycle.

For example, this is the underlying, unspoken assumption on the part of the company owner concerning why a single-piece-flow 55 gallon plastic barrel cleaning operation did not work perfectly after implementing our first design. His assertion, though unspoken, went something along the lines of, “Why am I paying engineers who can’t make it perfect, or even do it right?” He completely ignored the fact that his whole lab-centric operation did not flow well at all! (All of his production processes revolved around the shrine of his batch-and-queue, combination-research-and-quality-assurance laboratory and therefore did not flow very well… at all! In addition, the “Lab” was always backed up – surprise, surprise!)

It took three to four “best shot” iterations to change the 55-gallon, plastic, barrel-cleaning operation from a batch-and-queue operation to a single piece flow operation that used one third of the personnel, about one third of the footprint, and produced about two to three times the throughput from its previous design… not! something that could have been done in one shot… or it would have already been done! Oddly enough, as the proportion of product shipped from this company was delivered in plastic barrels, instead of in rail cars or semi-trailers, the barrel cleaning operation had become the plant bottleneck for those products: customers wanted more product than the barrel -cleaning operation could deliver using the rotating-back barrels … hence, the bottleneck… hence the reason to work on THIS PARTICULAR PROJECT vs. another one. (And, yes, his plant capacity DID increase (because we targeted the throughput bottleneck for capacity increase & production flexibility). His new bottleneck became the chemical mix tanks instead of barrel cleaning. (In this industry, the mix tanks were called “Reactors” and were much more capital intensive than barrel cleaning!) 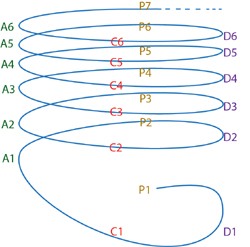 The “Helix” is my answer to the “instant perfection” expectation. Writing the PDCA cycle on a flat sheet or flat surface, with the expectation of it being “perfect in one-shot” freezes organizations, departments, and individuals. On the one hand, the “P” at the top of this cycle stands for “Plan Forever”: this plan will never actually be implemented because the risk of not being perfect is too high. Or, on the other hand, the “P” at the top of the cycle could stand for “perfect”, in which case you never look at it again. Both of these conditions are dangerous because the organization that does not figure out how to repeatedly apply improvement projects to its core constraints will eventually be passed up by a competitor who has figured it out! By the time that happens, the non-iterating organization will not know what hit it. The managers and staff will all blame something besides the lack of continuous improvement… probably internal politics!

Instead of portraying the improvement cycle as a flat, two-dimensional entity, it is more accurately portrayed as a three-dimensional entity with each cycle being a “thread” on a vertically ascending screw, with a decreasing increase in elevation per cycle around the screw. Or, in other words, as an ascending PDCA Helix with a decreasing pitch. Each trip around the Helix has all new Plan-Do-Check-Adjust steps. (The numeric postscripts refer to the project cycle or “Phase.” Phase is frequently abbreviated “Ø”, which is the Greek Letter Phi – Pronounced “FEE.”)

However, instead of portraying this path as proceeding around the perimeter of a vertical cylinder, with an equal radius throughout, it can more accurately and more appropriately be portrayed as starting with a smaller radius at the bottom and proceeding up to a wider top: like a PDCA tornado. 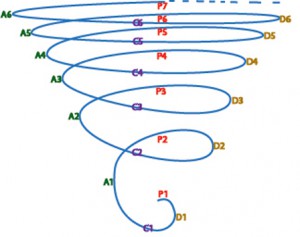 Rewriting, or in other words re-portraying this cycle as a vertical Helix, especially in the form of a tornado, accomplishes a couple of critical things. First, it eliminates the expectation of one-shot perfection, which takes the unrealistic perception of risk away from organizations, departments, and individuals, so they are able to use their actual current abilities to advance the standing of their organization. Secondly, the performance expectation shifts from “perfect-in-one-shot” to “take your best shot… quickly!” The speed between cycles without the expectation of instant perfection is what drives the tornado! Absent the “Instant Perfection” expectation the improvement cycle iterations behave like a tornado instead of like an arduous process.

It is not accidental that these Helix’s are presented with 6 iterations. It typically takes between 4 and 6 trips around the PDCA cycle for a system to move from chaos to a self-sustaining system – to move from expedited, backflow (or non-flow) , and chaos to smoothly flowing, no backflows, everyone-knows-what-is-expected-of-them-and-has-the-tools-to-do-it smoothness.

On the one hand, most people say, “Four to six iterations…? You have got to be kidding!” Because this is frequently perceived as way too many improvement cycle’s to even conceive in one area. On the other hand, (hopefully) the very reason they are working on a particular system is because it is the biggest pain in the neck in their organization and the entire organization spends way too much time babysitting the current ill-begotten system. In short, it is the single most critical organizational constraint. (If this system is not the central constraint to throughput in your organization, why are you even working on it? See the Theory of Constraints article.)

So, what is meant by “way too much?” Do they mean the months and years of being regularly interrupted, typically on an emergency basis, by a system that really doesn’t work? The expectation of “perfect in one-shot” is exactly what has perpetuated this ill-begotten system, which is a pain in the neck to everybody that deals with it!

On the other hand, running tornado-like PDCA cycle’s to eliminate the underlying causes and miscommunication involved in this system will make everybody’s life much less hassle and probably make the organization more profitable, or at least more productive. And what is more, you will be able to see this happen right before your eyes with each progressing cycle! In addition, it will take a lot less time and hassle to improve this system than it has taken to baby sit it for the last x-number of years.

This site will include examples of how this process works in such diverse fields as information processing, legal processes involving patent law, as well as physical-transformation-manufacturing processing. (See  Real Results: case studies)

You may also be interested in my version of the Strategic CPI (SCPI) rendition of this cycle.

There is a caveat to this method: skipping cycles… or in other words, trying to meld perfect in one shot with the tornado-like improvement helix sort of Continuous Process Improvement (CPI). Please see the Helix Trap article

A final note: if after you have developed and presented an improvement plan, you frequently encounter the response, “Yeah… but…“, you may be interested in the article by that name!