When considering process improvements, it is necessary to understand a concept from the Theory of Constraints. This is the concept of Flow Modules as presented by Robert E. Fox (Co-author of The Race with Eli Goldratt). These modules comprise the major sections of all high level process networks whether the network involves problem-solving processes, information management processes, physical production processes, or any combination of these types.

There are four modules and they are labeled by their shape. Fortunately, they look like the capital letters A, V, I & T. In all cases, “Flow” starts at the bottom of the letter and proceeds toward the top of the letter. 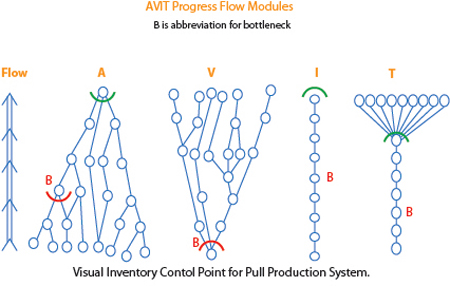 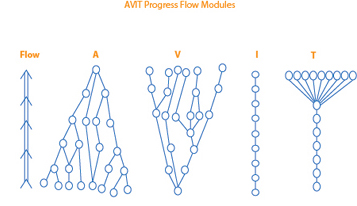 This flow pattern is just a straight through one-thing-right-after-another process. It looks like a capital “I”: a whole bunch of processes that run sequentially right after each other and they are dependent upon each other for delivery, quality and reliability. Another name for this structure is a First-In-First-Out (FIFO) chain. The “chain” part suggests the presence of stacked, sequential statistical dependencies.

This module is characterized by an “I” module with the last operation at the top of the “I” feeding a whole bunch of co-equal outputs.

An example of this is a ball bearing production facility where the bearings can go to either motors or to car wheels or to any number of mechanical devices.

Another example of a “T” network occurs when you encounter a system where “half of the things we deliver are late.” This situation probably means that one or more common things are happening.

There is a modification to this module where multiple “A” networks, as well as multiple “I” networks feed into an assembled-to-order-inventory.

How These Modules Operate Together to Form Processes

Consider the process of the periodic maintenance of a military aircraft. The aircraft shows up for periodic maintenance at the service depot and is summarily stripped of all of its parts and components down to the engines and the wheel bearings. This is a “V” network in that the airplane arrives and is summarily divvied out into its component parts.

Next you have a whole bunch of simultaneous “I” networks, where everything from the frame components to the electronics to the control surfaces to the engine components, etc. are cleaned and serviced or replaced. Each of these “I” networks can even be an “A” network if new parts or supplies are required to process these parts.

Next you have an “A” network where all of the components that have been serviced or replaced are reassembled and tested. The curious thing to note about this sort of network is that the last elements of the initial “V”, the inside most components of the various subsystems within the aircraft, are the first things that are needed to go into the final “A” network. Thus, you may properly suspect that “flow” is truly needed along these particular critical paths.

How to Control These Networks

The “control points” for each of these networks are fairly straightforward.